The Challenges and Opportunities Within Iraq’s Informal Economy 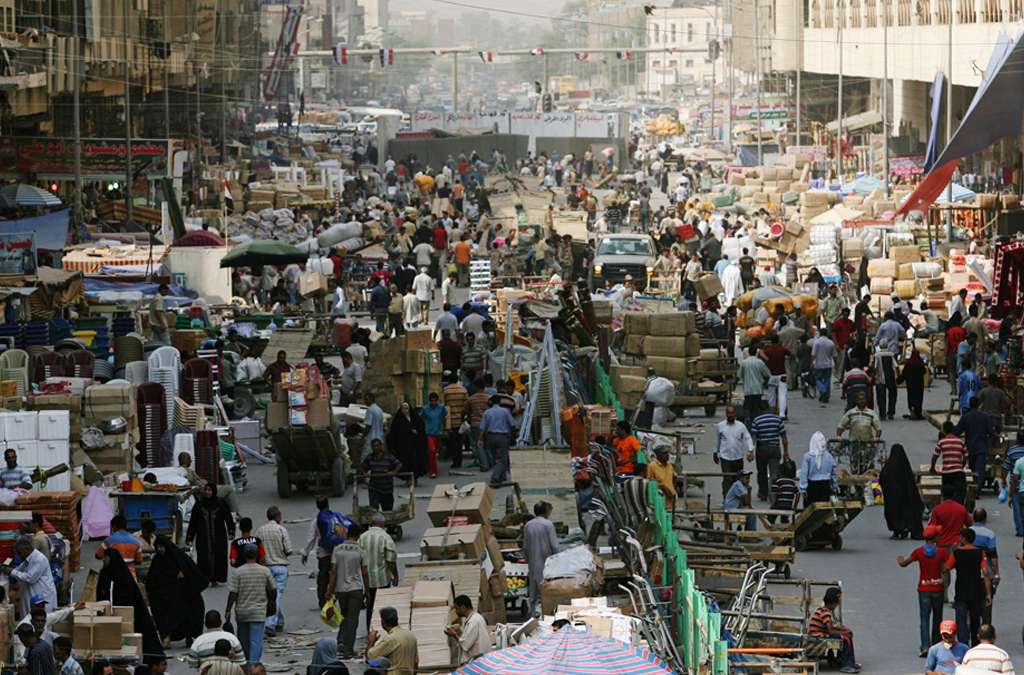 Policy discussions associated with Iraq’s 2021 budget bill so far ignored the challenges facing the country’s informal economy. The initial budget draft prepared by the Iraqi Finance Ministry, as well as the amendments proposed by Parliament’s Finance Committee have failed to properly address the structural challenges facing the country’s informal economy, which accounts for a large chunk of the private economic activities. Hence, the informal economic activities would fall outside proper regulatory and policy actions that Iraq needs to recover from the recent multi-faceted shock of the Covid-19 pandemic and international oil price drop.

The Covid-19 implications have left a significant effect on the informal sector. Most of the reported job losses, work-reductions happened in this sector. Informal workers such as vendors, small shopkeepers, daily-wage workers and self-employees are extremely vulnerable to any economic crisis;

they are the segment of the population who have been affected most since the early days of the health crisis; they were left behind by the Government of Iraq (GoI) and Kurdistan Regional Government (KRG) because they didn’t exist in the databases, and consequently failed to include them in the financial support programmes and food-basket distribution supposedly designed to help them.

The informal economy is broadly defined as businesses, workers, and activities that operate outside of the tax system and regulatory frames. Nearly 70 per cent of all private economic activities in Iraq are informal[1]. Most of Iraq’s labour force working often without any contract although they are involved in the production, value-chain, distribution system, and social services. A survey of the International Labour Organization, in a sample size of 714 employees (686 men and 28 women) in the Kurdistan Region of Iraq (KRI) and Iraq’s northern provinces found that only 34% of them have written contracts, 40% of the works are based on oral agreements, and 26% have neither.

Challenges and Opportunities within the Informal Economy

To set an institutional frame for any economic reform plan in Iraq, this informality needs to be addressed. It is a huge cause of the misallocation of resources and goes beyond the taxing system. The Iraqi Government’s White Paper tended to be a reform agenda to address economic imbalances and structural issues, barely addresses the key regulatory and policy issues that have kept the majority of private economic activities informal. The Government’s recent policies, reflecting through the currency (IQD) devaluation and the 2021 budget draft, only contribute to the repulsive environment that has led to this informality. For instance, in the 2021 budget bill, the government increased funds for the military and security institutions by almost 15 trillion IQD (compared to the 2019 budget law). This is 16 per cent of the total spending and equal to the amount allocated for capital investment and development. The budget allocations show that the government is still pursuing the same pattern of militarizing the population instead of organizing and reforming the economy to include informal firms and workers.

Iraq’s private sector provides jobs for more than 53 per cent of the country’s labour force, about 5.4 million workers. Of this number, only 5% are insured (208,000 by GoI and 80,516 by KRG)[1] The rest are not registered and neither recognized by the country’s tax and insurance systems. 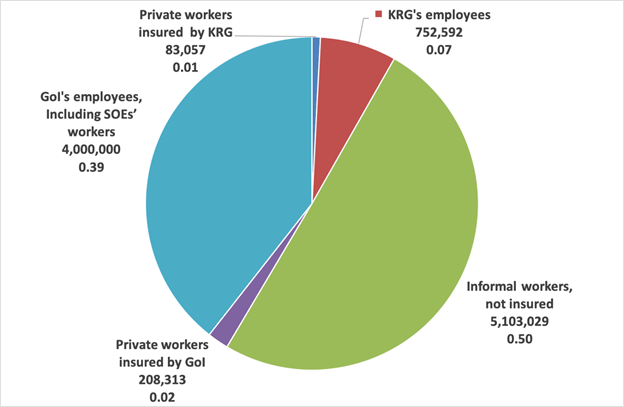 Even before the COVID-19 pandemic and recent oil price drop, informal employees did not work and live in a safe environment. They have no access to finance and do not enjoy the retirement and job security public sector workers have. In Iraq, the social protection system in pension, health, and disability benefits are provided only for public employees. The informal workers were the biggest challenge for Iraqi governments, while they were the most vulnerable segment of the population. Many informal workers fear hunger more than Covid-19. Their risk assessment is probably different from the policy makers’ calculations that led to lockdown decisions. Although working in over-crowded streets make them vulnerable from a health perspective, they also become a risk for the whole population as they disobeyed public health directives. They started protesting a KRG’s order to impose another week of lockdown on June 6th, so they forced the government to retreat from its lockdown decision. For them, it was difficult to sit at home while they must earn their income daily.

Organizing and formalizing informal economic activities is one of the preconditions of any structural reform programme. The informal sector evolved through multiple conflicts and changes over the last five decades and in the absence of an adequate regulatory frame; from the Ba’ath Regime’s “socialist” economic policy to the post-2003 limited access-order regime. Now, it is the largest part of the country’s private sector by far but operating outside of any coherent policy. A study by United Nations Educational, Scientific and Cultural Organization (UNESCO) estimated, “two-thirds of all workers in Iraq work informally (over 7 million people).”[2] It also found a strong correlation between youth, working informally, and low levels of education. Meanwhile, returns on investment in education are relatively poor in this sector compared to the public.

For any economic reform, the GoI needs to look at the informal workers as a source of popular support. The informal economy is the livelihood of millions of impoverished Iraqis whose support can make a big difference; otherwise, they might be attracted to radical ideologist groups and militias that already have resources, media, and organizations to exploit them.

The informal workers and employees are the majority in Iraq’s labour market, but they are not politically visible. They have no political party, interest groups, and media to advocate their rights. Their issues, rights, and concerns have barely brought to any policy agenda because they are not well-organized and mostly exploited by populist politicians. They have no parliamentarian representatives and political blocs to bring their demands and needs to policy agendas.

Within any economic-reform planning, NGOs, unions, and advocacy groups that can represent informal workers should be included in policy discussions. Their perspectives and needs should be considered in any regulatory projects that will be introduced to enhance Iraq’s private sector.

Part of the informal economy is the construction labour market. Most of the construction workers, in the first phase of the COVID-19 containment measures, were forced to stay at home with no compensation for their lost wages although they need to go out-earning their income on the daily basis. By late April 2020, when the lockdown restrictions relaxed, day labourers could attend their workplace and gather in the crowded bazaars or streets to find employers, but the market is barely holding any opportunity. “Too many day-labourers are competing over a few opportunities.”[2] The causal labour market yet to recover and return to the pre-pandemic level.

Wages and opportunities of the construction labourers have significantly been reduced in this market. Although casual workers had no fixed payments before the Covid-19 pandemic, they used to work for daily wages between IQD 25,000-35,000 in Baghdad and 35,000-40,000 IQD in Sulaymaniyah. In late June 2020, their daily wage was between 20,000-25,000 IQD in both provinces except for refugees, IDPs, and foreigners who tend to work for even less.

Moreover, the frequency of their working days per week also changed. Before the pandemic, they used to work between 4-5 days per week on average, but in late June they barely get 2-3 days working, according to rough estimations of relevant labour syndicates[3]. Workers who lost their jobs in other sectors have oversupplied the construction labour market.

The majority of construction workers do not opt to be in this labour market, and they do not see it as a decent job. They are not granted with work-safety, and they often do not have the required personal safety equipment. They tend to work for whoever hires them in the allocated urban labour-places without any contract. No statistical data is available on this segment of Iraq’s labour force, which is mainly male-dominated.

Different labour laws enacted to organize the construction labour markets in KRI and the rest of Iraq. Instructions and regulations issued by the Ministry of Labour and Social Affairs to ensure casual labourers, but only 5% of them are insured. Foreign workers’ exploitations have been reported by NGOs and news outlets in various instances. Rudaw, a local Kurdish TV, reported that “Migrant workers in the Kurdistan Region are vulnerable to exploitation, abuse, and trafficking because of limited oversight by the Ministry of Labour and Social Affairs, a minister has acknowledged.”[4]

Turning this issue into an opportunity, both GoI and KRG need to organize this labour market. Recognizing the casual workers as legally registered employees for retirement and tax contribution is the first step. They should be included in Iraq’s tax and insurance systems. This can be the first step to incentivize private sector employment and reduce pressures on the public sector. It requires governments’ and law makers’ immediate actions to initiate a legislation project that could be beneficial for both workers and the state since the existing law and directives do not work well. According to the Pension and Social Security Law of Workers, the retirement system guaranteed by a fund that depends on contributing 17 per cent of labourers’ wage; 5 per cent to be paid by the worker and 12 per cent by the employer. The issue is most of the construction labourers do not have a stable employer to pay the 12 per cent contribution. Many companies also underreport the number of their employees and the bulk of employees’ salaries just to reduce their contribution. To make Iraq’s private sector job desirable and bring back some of the lost contributions to the fund, the issue should be addressed.

Given mounting risks and challenges associated with any economic reform programme, GoI and KRG need to get popular support for any intended reform policy. Most of the required immediate actions (resorting to ordering in the border-ports, reducing wasteful public expenditures, cutting illegal public salaries and pensions) are going to hurt some segments of the population who have been fed on the public fund. Therefore, the governments need strong popular support to kick off any reform programme. This support could be found within the millions of Iraqis who work in the informal sector. For this purpose, informality should be addressed now, although it is a long-term achievable goal.

3- Informality is usually associated with high poverty, low productivity, under-employment, and misallocation of resources. It has created a situation in which informational asymmetric prevents banks from lending to MSMEs due to the absence of credit history, poor financial reporting, and eventually fearing of insolvency. As a result, banks and viable projects can’t meet. Optimal policies should be designed soon to incentivize the registration process by ensuring informal firms and workers and adding them to the tax-paying lists, a win-win solution for the governments and the informal workers.

4- Benefiting the recently rising international oil price, the GoI and KRG need to allocate some funds to support the SMEs and small informal businesses to recover the multi-faceted shock.

Studies show that microfinance and business-training programmes can improve the efficiency, productivity, and earning-potential of the informal sector. The financial support could be designed as an incentive to formalizing all the small firms and businesses. Again, this is another place where a win-win deal could be brokered. The governments’ financial support can save the SMEs and small businesses from bankruptcy; in return, they can be also added to the list of tax-payers.

[2] The statement was made by Othman Zindani, head of Construction Labour Syndicate, Sulaymaniah Branch, in a recorded interview for this study.